Often times we as traders are stubborn and outright emotionally unfit to admit defeat.  There is a benefit to crunching your statistics when trading systems.  First you must be able to log all of your trades and be able to separate out each system, so as to NOT blend them together if at all possible.  It happens sometimes where that systems share the same signal, but don’t combine systems’ statistics when you analyze their results.

I am highlighting a strategy in my QA that failed and that I abandoned called the “OVERAGE” system.  This strategy was based on selling short overbought or buying long  oversold signals on an indicator designed to point to these overages.  I used the deviation from an exponential moving average.  This indicator is simple and not important, just know that it is like RVI, stochastic, or any indicator that shows you that price has gone what it thinks is “too far” in one direction.

Where I purposefully set this system up to fail lies in the exits.  I decided the best way to destroy a system would be exiting too early.  So, unless I could pass the trade off to another system the next day after entry, the trade exited the day after entry.  This means that the trading time wasn’t giving the trade enough time to play out.  The pic below says an average of 2.7 days, and that is because of weekends.  However, even in this somewhat absurd exiting method, there was a way to improve the system.

Let’s break down my takeaways: 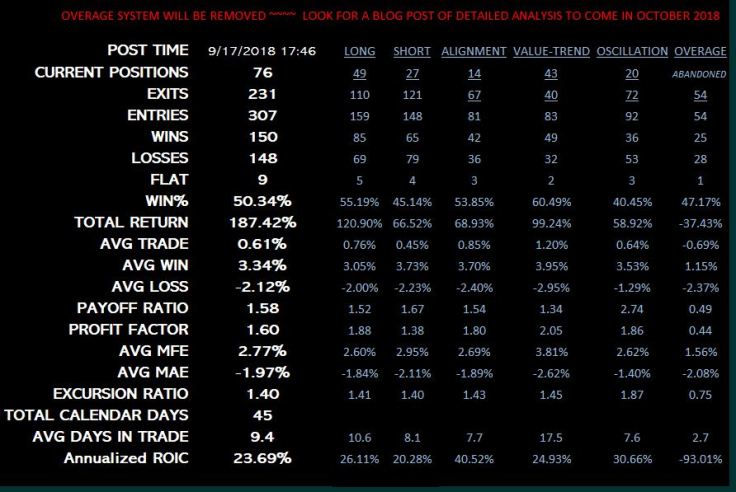 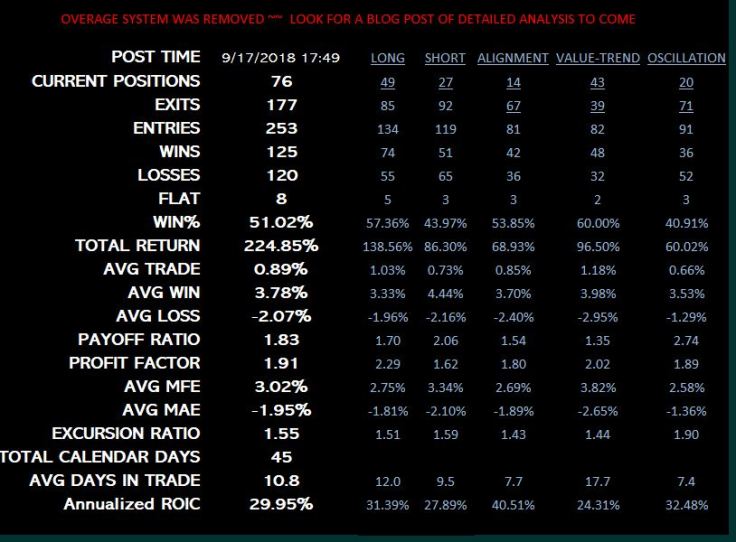 In the first pic again, you see that the average loss and average win on the trade made for a PAYOFF RATIO of 0.49 to 1 and if you continued doing this for 365.25 calendar days you would lose 93.01% of your money.  If these statistics don’t tell you STOP WTH YOU ARE DOING, I don’t know what will!

I posted this because I feel like the thing I struggled with the most when I first started trading algorithms is that I wanted the backtests to come to life like they look in history.  Trouble is that doesn’t happen.  What happens is the market does what it wants; and only when you see the statistics play out in real time can you make an undeniable argument for or against your system.  Hold each system TOTALLY ACCOUNTABLE!